This article was originally published on October 21, 2022 in Plastics News. Plastics News photos by Marco Stepniak

Lectro Engineering CEO and owner John Bliven says he brought his company’s most powerful open air plasma surface treating unit to K 2022, which company ofofficials say will lower operating costs by eliminating adhesion promoters and enabling the use of inexpensive water-based paints and inks for decoration.

St. Louis-based Lectro Engineering Co. Inc. developed the smallest and most powerful open air plasma surface treating system in its 62-year history and will bring it to K2022. 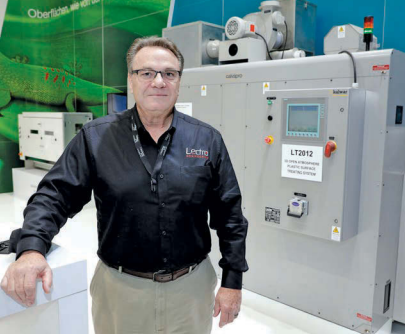 The unit, called LT2012, is designed for new applications and existing product lines where space is at a premium. The size of the system is much more compact and powerful, making it well suited to replace flame-based surface treating and other methods, according to Lectro Engineering CEO and owner John Bliven.

Traditionally, only polyolefins, such as polyethylene and polypropylene, needed surface treatment in certain cases. Now, however, with the increased use of water-based adhesives, primers, paints and inks, Bliven said there is a growing need to surface treat other types of plastics, such as styrene, ABS, PVC, engineering plastics, acrylics, polycarbonates and more.

The LectroTreat process creates cold electrical plasma in air that flows across a plastic substrate to raise the surface energy.

Founded in 1960, Lectro serves plastic processors and decorators with equipment for downstream blow molding line automation in addition to surface treating. Bliven acquired the company in May 2020 and invested in additional space, machining centers and employees.

The company was in the news earlier this year after stepping up its build schedule to deliver a spin trimmer to a bottle producer whose order had fallen through the cracks of another equipment builder.

Now Lectro is showing off its LT2012 unit, which company officials said will lower operating costs by eliminating adhesion promoters and enabling the use of inexpensive water-based paints and inks for decoration.

The LT2012 can be used with all types of molding processes like injection molding, blow molding, extrusion molding, thermoforming, rotational molding and vacuum forming of plastic parts.

The company’s machines feature a plasma tunnel system that quickly treats all surfaces of an object at once. The process eliminates unpredictable and possibly dangerous fire elements and doesn’t require slow and precise detail treating like direction-type plasma systems.

The absence of an open flame in the plant also will create a safer work environment, lower scrap rates and lower operating costs and insurance premiums. “It requires no expensive tooling or robotics while assuring you of 360-degree treatment of your part. These combined features are unmatched in the plastic surface treating industry,” Bliven said.

Lectro Engineering has been supplying this technology to the automotive, container, medical, industrial, recreational, housewares and promotional items markets with great success, he added.